Arriving a little later than planned, parking at the Talbot pub carpark, I set off along the Wharf footpath. The first field was filled predominantly with grasses, buttercups and dandelions, a yellow carpet interspersed with silver dandelion clocks.

Reaching the end of the field I crossed the concrete bridge by the sluice gate to the sound of rushing water, rain from the last day or so has increased the general flow in the stream. The vegetation has grown up a lot in the last few weeks and the weather has warmed and droplets of water glisten in the sunlight left over from last night’s downpour. May has arrived with a vengeance. 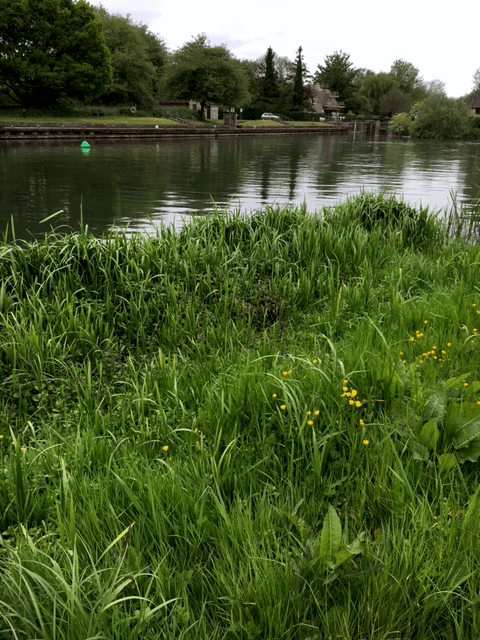 Searching the reed bed next to a meander in the Thames by the weir I spot the first damselflies of the day, the banded damsel. This is a distinct damsel with a magnificent metallic blue body and a deep and broad deep blue ‘spot’ towards the end of the wing. Its wing are folded back above the body as it nestles deep in the fresh growth of the new sprouting reeds. As the temperature is quite cool this morning they're not flying, unless you get a little too close, then they flutter off to a safer perch.  There are more, 8 in all, in the surrounding area.

Moving on, a short stroll to the weir, through the swing gate, over the weir and onto the Eynsham lock island, then across the lock turning downstream along the Thames path. I head out in pursuit of the Club-tail Dragonfly (Gomphus vulgatissimus) that generally emerges as a larva from its watery habitat around the second to third weeks of May. Having spent up to 2-3 years underwater the adult breaks free as a fully mature dragonfly.

Heading along the path the storm appears to have brought down an aging willow across the path, creating an unexpected obstacle course for cyclists and walkers alike. As I enter the wooded path, I stop periodically at gaps in the trees where the bank gently meets the river. They are muddy spots, full of emerging reeds, nettles and other flora, perfect habitat. At the third gap, I push forward into the nettles to get a closer look, and in the corner of my eye a flash of yellow in the vivid green vegetation, could it be a ……., yes, it is the first view of the club-tail on this stretch. To put into context the delight, I’ve been searching for the last 3 weeks, so anticipation of finding this relatively rare jewel is huge. 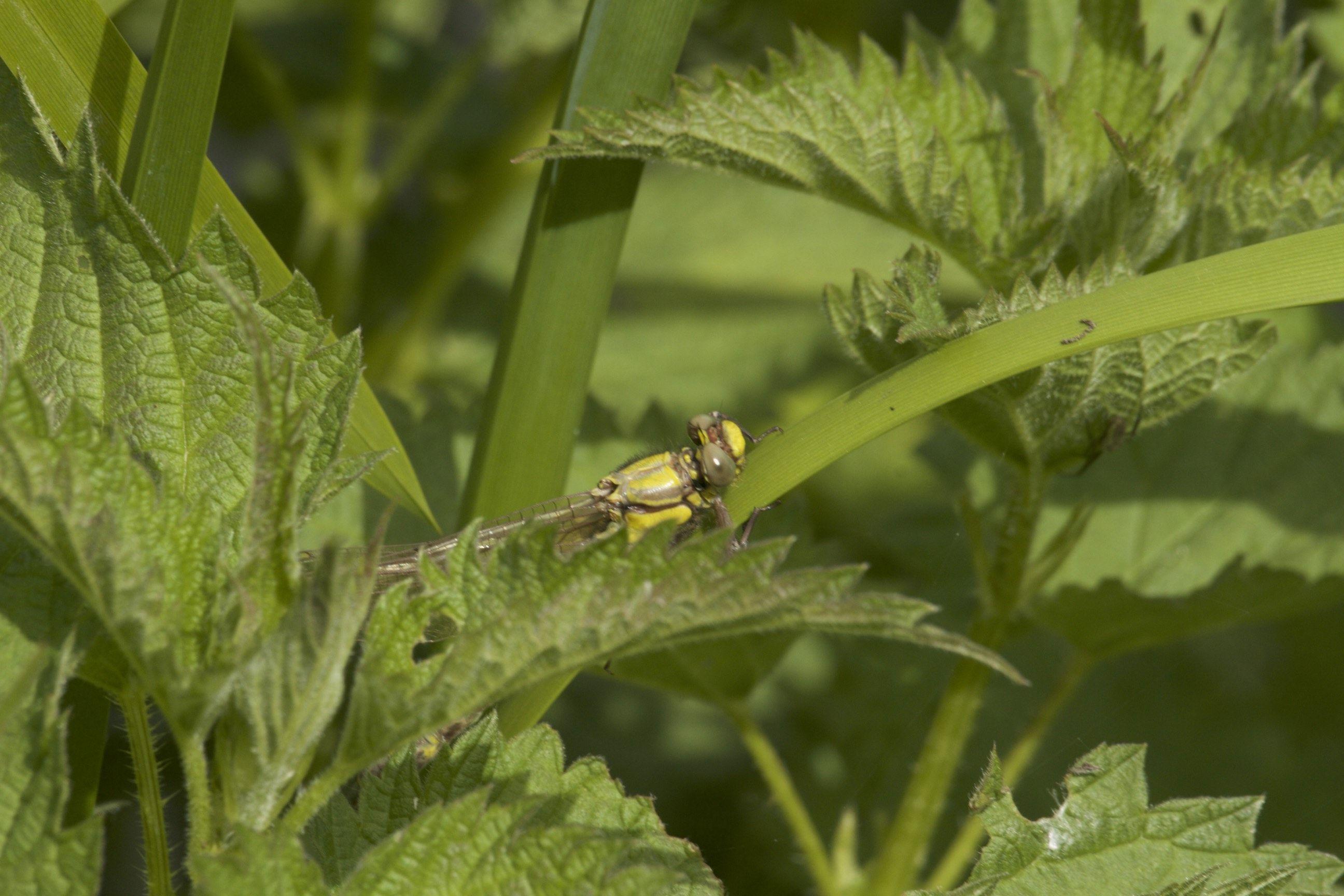 It’s tell-tale translucent appearance indicates it a newly emerged specimen. As I get a bit closer, it seems its wings are not yet fully flight ready, then the whole body comes in to view. It is a medium sized dragonfly about 2 inches (50mm) in length coloured yellow and black, although the full depth of colour is yet to develop, at the moment it is lime green (a slightly lighter shade of green to local vegetation) and brown. There’s a set of distinctive yellow spots at the end of the lower tail which is broader than the rest of the body (this is what gives it its name Club-Tail) and it looks like the more slender male. 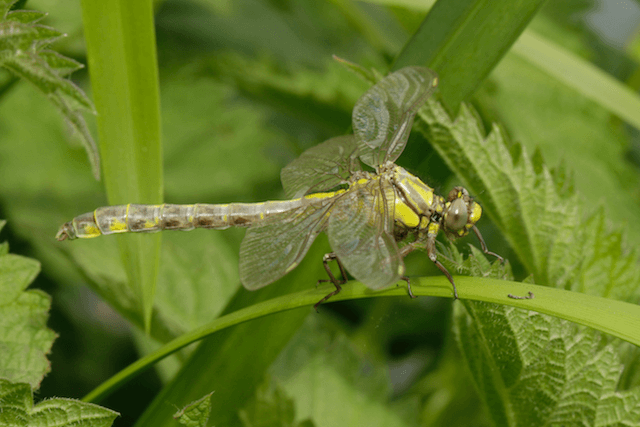 Parting the reeds gently, I see the exuvia just 4 or 5 inches from the adult. (An exuvia (plural exuviae) is the cast-off outer skin of an arthropod after a moult. In summer, it's often possible to see exuvia of dragonflies on plant stems near the water's edge.). It appears I’m just a little too late to see the emergence, but so happy to be witness to this event none the less. The exuvia is no more than 30mm, grey/brown in colour and still clinging to the reed as if it were climbing too. 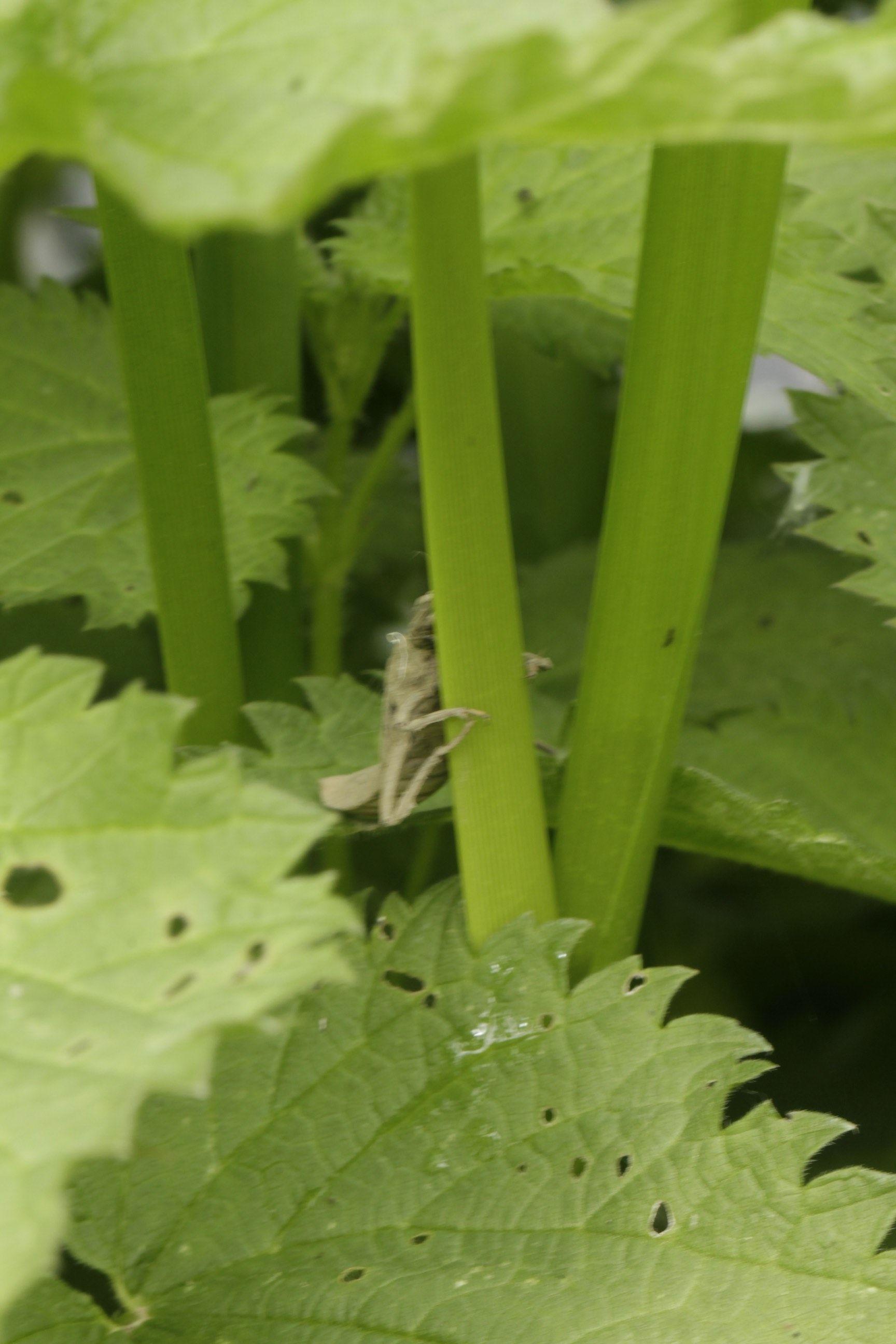 The adult climbs to the top of the reed and opens its crumpled wings. They are folded back above its body initially before opening flat and becoming taut in the sunlight. This species has eyes that are slightly different from most dragonflies in that they do not meet in the middle, they are separated by a lime green/yellow bar. It only takes 20 minutes before it looks ready to leave on its next stage of its lifecycle. 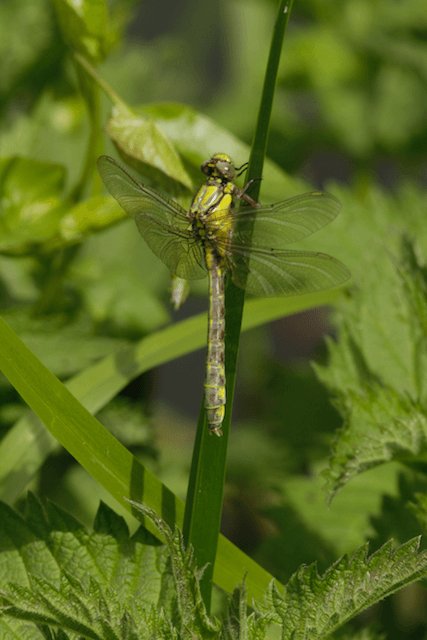 Onwards, the search continues, towards the entrance to the Evenlode river. The tree covered path opens out to open fields, where young cattle graze. With Wytham Wood to the right coming into view rising up to the north. The riverbank is flanked by willow, and hawthorn with the path tracking the river onward towards Oxford. It’s here I see the third spot of the afternoon. It small and timid, very sensitive to local movement. Attached to a stem of nettle a striking bright blue segment on its tail stands out, it a blue tail damselfly (Ischnura elegans) It’s a fleeting encounter, just enough to get a photograph, then it’s gone about it business. 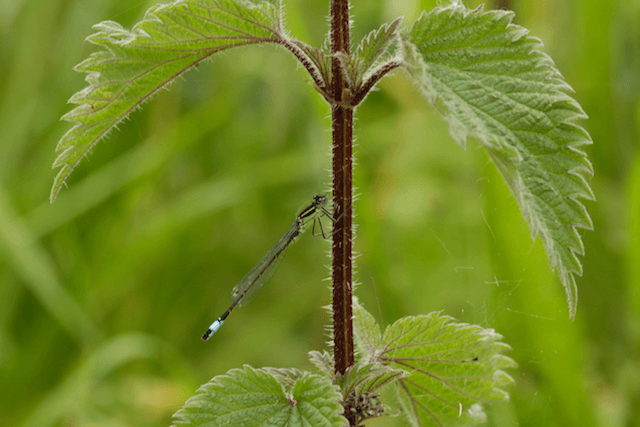 I too make the return journey back to the pub for a cheese sandwich to consider days events. The plan is to put together a collection of framed pictures and some cards of all the varieties of Dragonflies and Damselflies I spot on my walks around the country.

Thank you! Please check your email and confirm your subscription. 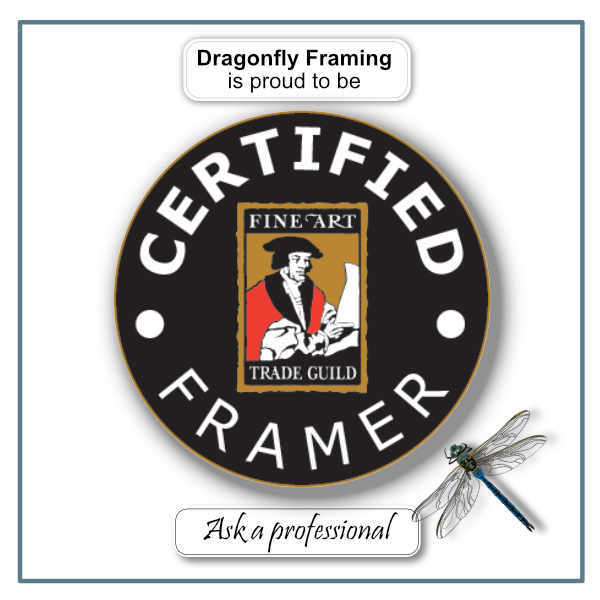